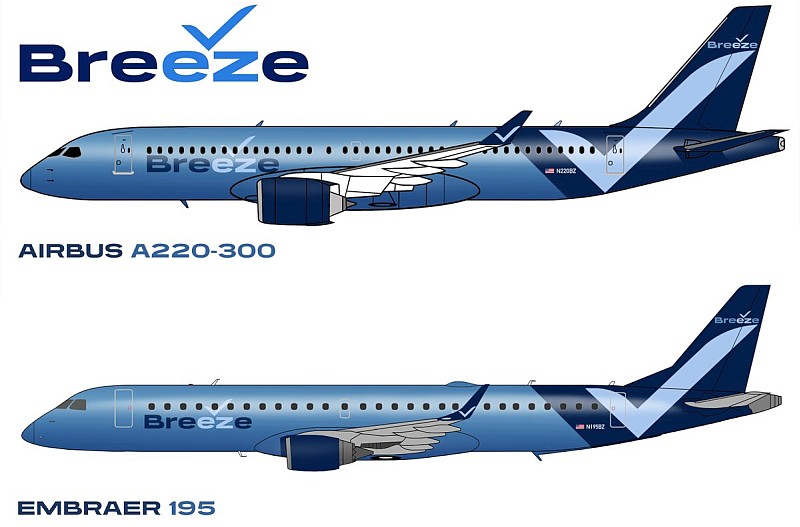 Breeze Airways: Check-in at the airport

Check-in at the airport for domestic flights of the low-cost airline «Breeze Airways» within USA starts 2 hours and closes 45 minutes before the flight departure.

Checked bags must be within 62 linear inches (length + width + height) and weigh no more than 50 pounds.

Breeze Airways (initially Moxy Airways) is a United States airline that began operations in May 2021. The airline was founded by David Neeleman (who previously co-founded Morris Air, WestJet, JetBlue, and Azul Linhas Aéreas).In June 2018, Neeleman planned a new U.S. airline, to be called Moxy, with capital from former Air Canada CEO Robert Milton, former ILFC CEO Henri Courpron, former JetBlue board chairman Michael Lazarus and himself. They noted that due to consolidation in the airline industry, the top 11 airlines were profitable and had been around for more than 20 years (except JetBlue, which Neeleman had started in 2000) and that there was room for a new competitor. ​American Airlines, Delta Air Lines, United Airlines, and Southwest Airlines carried 80% of US domestic passengers in 2017, with Alaska Airlines, Allegiant, Frontier Airlines, JetBlue, Hawaiian Airlines, and Spirit Airlines making up most of the rest.

Due to the loss of flights to smaller markets, US domestic air capacity remained stagnant from 2007 to 2017, while the economy expanded by 34%. To fill this gap, Breeze plans to offer point-to-point flights from smaller secondary airports such as TF Green Airport (Providence), Fort Worth Meacham, or Burbank, bypassing hubs for shorter travel times. The airline is also reportedly considering longer-haul flights to South America and Europe. It would offer spacious seats and free Wi-Fi, like Azul and JetBlue, but would charge fees for refreshments and advance seat assignments, like ultra-low-cost carriers Allegiant Air or Spirit Airlines. To begin flight operations, 60 Airbus A220-300s (formerly known as the Bombardier CS300) were ordered, with Chinese lessors being asked to finance 18 to be delivered from 2021. However, to speed up the airline’s launch, Breeze plans to use used Blue Embraer E195 aircraft as early as 2020.

On February 7, 2020, it was announced that the airline was now officially called Breeze Airways. The previous name, Moxy, clashed with Marriott’s trademark Moxy Hotels. The airline’s brand, such as the aircraft’s logo, colors, and livery, was developed by Brazilian airline marketing specialist Gianfranco «Panda». Beting, co-founder of Azul and responsible for the creation of the Azul brand, TAP Air Portugal and Transbrasil.

In February 2020, Neeleman expressed the opinion that the airline would be known as the «prettiest airline in the world».

Breeze professes that he wants to offer a low-cost product, but says he also plans to offer a high-end product; so it will not operate with a true Low Cost Carrier (LCC) model.

The proposals include some LCC features (such as a point-to-point route network, additional fees for additional services), but will not have a single cabin class (those who pay more will have access to a 2-2 seat configuration and more legroom) and, in fact, Breeze says it will charge for «what is effectively four classes of service, starting with an ultra-low-rate product, where you can buy more exclusive services.» The aircraft will not have in-flight entertainment on seat backs; instead, the entertainment will be streamed through the airline’s app, which will also be used to purchase flights and upgrades.